Tourism of The Great Asia Africa in Lembang Bandung, Regional Tourist Attractions – At the end of November 2019, there was one tourist attraction that was busy talking on social media, namely The Great Asia Africa Lembang. The Great Asia Africa Lembang is a tourist attraction that raises the idea of ​​cultural education. As the name implies, this one tourist spot raises the idea of ​​cultural education tours from several countries in the Asia-Africa region. The Great Asia-Africa Tour was built with inspiration from the Asia-Africa Conference meeting which was previously held in Bandung. Visitors can see the cultural diversity, important buildings and traditional cuisines of seven countries in Asia and Africa. Besides that, you can also rent clothes such as Kimono, Kurti Salwar and other clothes.

The Great Asia Afria is a Lembang tour which is located on a cliff which originally only served as a parking lot for Farmhouse Susu Lembang. This location is then transformed into a tourist attraction which is of course favored by all age groups. You will be taken on a tour with foreign nuances built in such a way as to the original situation.

The main attraction is that you will be taken to travel to 7 countries in the Asia-Africa area. Such as Indonesia, Japan, Korea, India, Thailand, Africa and the Middle East. Don’t forget to shop for the great Asia Africa souvenirs that are available to make at home or to give to colleagues, relatives and others. The Great Asia Africa Tour is located in an area of ​​five hectares right in a valley offering cool air and a panoramic view of the hills of the North Bandung Region. By spending an entrance ticket of IDR 50,000 / person, travelers are taken to tour miniatures of traditional villages from seven countries, namely Korea, Thailand, India, Japan, Indonesia, Africa and the Middle East. The characteristic building ornament in accordance with the original country makes travelers feel at home for so long exploring the selfie spot just to fill out their personal social media account. Not only iconic buildings, each vehicle provides food or drink typical of that country. Many tourists who deliberately visit this Asia Africa Tourism Area with their families. The Great Asia Africa is an educational tour that presents the beauty and diversity of cultures in Asia and Africa. The place is nice and educational. We know where Asia Africa are the countries. There are many photo spots, and the culinary invites attention to try. One of the spots that is widely used for selfies is the miniature spot in Korea and Japan. Because the two miniatures are truly iconic and make travelers feel real in the country. If the Korean one gets a photo, then wear Korean-style clothes. Then the spot is Japanese, it’s really like playing in Japan. 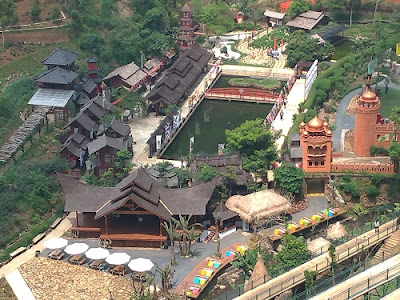 For the price of admission to tourist objects, the manager sets a price of IDR 50,000 per person. The ticket has been calculated for visiting the seven existing rides. If you want to pose in each photo spot, you don’t need to pay anymore. You need to know that each ticket given can be exchanged for a variety of drinks with many variants, such as mango, guava, soursop, lemon, watermelon, and many others. Not only can we exchange it for drinks, we can also exchange it for various kinds of the Great Asia Africa merchandise, such as key chains or refrigerator attachments.

What time does The Great Asia Africa Tour open?

The operational time of the great Asia Africa every day from 08.00 to 20.00. So if you want to come here, it is recommended that morning approaching noon or afternoon approaching evening