The beauty of climbing Mount Semeru, East Java, the most beautiful tourist spot – Come on, friends, immediately prepare physically, mentally, luggage, adequate food and drink supplies because we are going to the top of Mount Semeru. Mount Semeru is located in two districts, namely Malang Regency and Lumajang Regency, East Java Province. While the height of Mount Semeru is 3,676 meters above sea level (masl). Mahameru is the name of the peak of Mount Semeru. Mount Semeru has a long climbing history and has become one of the favorite mountains for nature lovers to climb. Puncar Mahameru was conquered by the first climber named Clignet, a man from the Netherlands in 1838, the number two climber, Van Gogh in 1911, and in 1945 a climber number three named Junhuhn appeared.

One of the climbing locations that continues to suck up a lot of climbers is in the Bromo Tengger Semeru National Park area. Several habitats for fauna and flora, such as edelweiss and the endemic orchid of Semeru, are encouraging during the hike of certain areas in Semeru. At certain times this area will be crowded with the implementation of the offering ceremony as a sign of respect for Lord Shiva and asking for safety and blessings for the local people. This area is considered the Father of the Mountain and it is believed by Balinese Hindus that Lord Shiva resides in Mount Semeru. 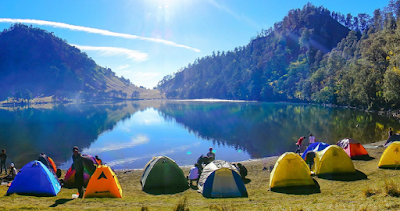 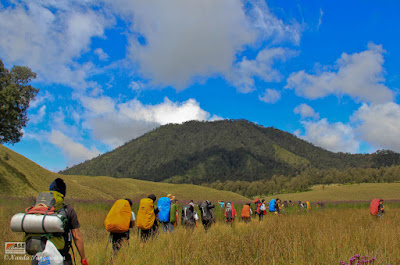 The legend of Mount Semeru

Legend Semeru Mountain is a folklore that is believed by the people around Mount Semeru. This story tells about the origin of the name Mount Semeru. This story will make us feel amazed by the legend behind Semeru. It is said that Semeru, which is an important mountain in Hinduism, was located in India under the name Mount Meru and was moved to Java Island, this is stated in the Tantu Pagelaran book. Once upon a time, Mount Meru became a nail for Java so as not to shake with the help of the gods, because before Mount Meru moved to Java Island, Java Island was an island that was bobbing in the wide ocean. During the removal of this mountain, Dewa Shiwa transformed into a giant turtle who swam towards the island of Java with Mount Semeru carried on its shell. It can be seen from the west side to the east side that there are many mountain ranges on the island of Java, this proves that the mountain that was carried by a turtle was first placed on the west side by the two gods. However, because the eastern side was lifted due to the weight on the west side, the mountain was moved to the east side. Well, it was during this transfer that the pieces of Mount Meru fell and now form a mountain range from the west to the east side. But this does not stop here, Mount Meru which is placed on the eastern side of Java Island does not make Java Island parallel, for that the Gods cut off part of Mount Meru, then placed it to the northwest of Java Island which is known as Mount Pananggungan.

1. Ranupane – Ranu Kumbolo
From Ranupane where is the starting position to start climbing towards Ranu Kumbolo via Watu Rejeng. The trip to Ranu Kumbolo takes about 3 hours and you can take it by hiring a guide.

2. Ranu Kumbolo – Kalimati
Before leaving Ranu Kumbolo, it is advisable for climbers to fill up drinking water because it is about 3 hours to reach Kalimati where no water sources will be found anymore. The journey to Kalimati will be decorated by vast expanses of meadow and beautiful mountain flowers. In Kalimati, you can set up a tent to spend the night while unwinding with a sprinkling of sparkling stars that sparkle into the night lights here.

3. Kalimati – Mahameru
The last route that must be taken to get to Mahameru. It is recommended to leave starting at 02.00 so that you can watch the sunrise at the top of Semeru. The temperature that will be covered here is around 10 – degrees Celsius, if the dry season comes the temperature can reach minus degrees Celsius, it is not uncommon to find ice crystals that are very beautiful if exposed to sunlight. Be careful if during the day, late in the evening there will be fog that will interfere with vision. Especially if you come in January-December, there are often storms.

Read: List of the most popular tourist attractions in Malang
Thus was the beauty of climbing Mount Semeru, East Java. Hopefully