As an Islamic kingdom, Kasunanan Surakarta still preserves various kinds of cultures that breathe Islam, one of which is when entering Muharram Month or Islamic New Year’s Eve, Kasunanan Surakarta organizes Cultural Kirab in the form of the Kebo Bule Kyai Slamet carnival. In the Javanese calendar, the month of Muharram is known as the Month of Suro, so the Kebo Bule parade is often known as Korab Malam 1 Suro. The Kebo Bule in the Surakarta Sunanate is a sacred animal by the palace. Kebo bule is a type of albino buffalo, so that from its appearance it is different from most buffaloes. Because of the albino, the color of this buffalo tends to be white. According to the Kasunanan Palace, Kebo Kyai Slamet himself died several years ago. Kebo Caucasians who still exist today are descended from Kebo Bule Kyai Slamet. 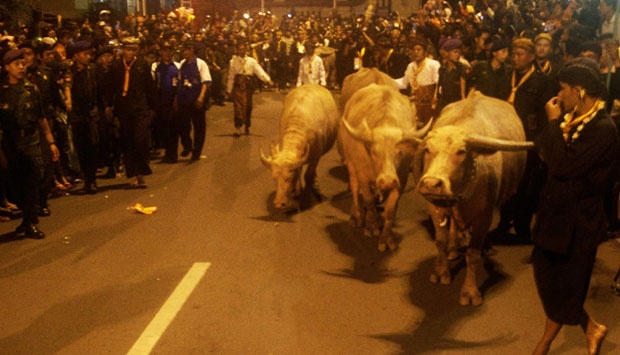 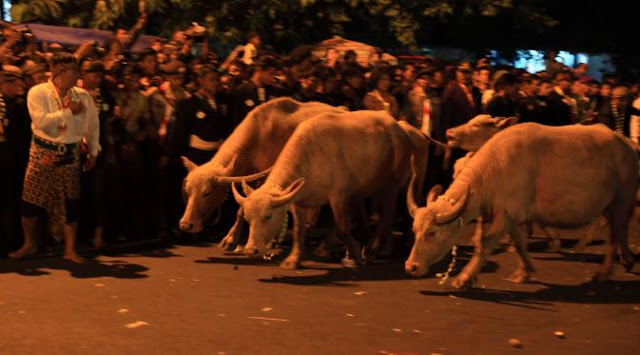 During the reign of Pakoe Boewono II, around the 17th century, when the Mataram Kingdom was still in the Kraton Kartasura, it was told that in the kingdom there was a rebellion launched by Pangeran Mangkubumi which made King Pakoe Boewono II have to flee to Ponorogo. In Ponorogo he was accommodated by the Regent of Ponorogo and stayed there for some time until conditions were safe. During his flight in Ponorogo, the King of Kartasura received an occult or wangsit clue that Kyai Slamet’s heirloom had to be ‘dirso’ or guarded by a pair of ‘kebo bule’ or albino buffalo if the kingdom was to be safe and lasting. By the power of God Almighty, as if a tit for tat, the Regent of Ponorogo suddenly wanted to show his devotion to his king by offering a pair of ‘kebo bule’ to sinuwun. Kebo Caucasians or albino buffalo are very rare pets, only certain people have them. So Sinuwun Pakue Boewono II accepted the regent’s ‘pisungsung’ (offering) well and thanked him for the offering which was very suitable for his needs. Sinuwun brought a pair of white buffalo back to Kraton Kartasura after the rebellion ended and until the kingdom moved to Sala Village and changed its name to Kraton Surakarta Hadiningrat.

In commemoration of the ascension to the throne of Paku Boewono VI, as well as the change of year in the Javanese calendar for the night of 1 Sura, creativity emerged in presenting the figure of kebo bule who is believed to be the incarnation of Kyai Slamet’s heirloom in the heirloom grave.

The uniqueness of the Kirab Kebo Bule 1 Suro night

The Islamic New Year’s Eve commemoration event on 1 Suro with the Kebo Bule Kyai Slamet carnival becomes an interesting cultural attraction for the surrounding community. Even visitors who come not only from Solo City itself but also from various surrounding districts. During the procession, the courtiers who participate in the kirab are obliged not to speak or to be silent. Along the way, many residents scrambled to touch this sacred buffalo. There are even some people who believe that this white buffalo dung can provide blessings. Therefore, not almost always someone who comes out along the way, does not always pick it up.

There are many interesting stories related to this Kebo Bule Kyai Slamet. It is said that the white buffalo was left free to roam anywhere, even going outside Solo. If this buffalo eats something, for example agricultural crops, the farmers usually leave it alone and do not drive it away. Farmers even feel happy if their plants are eaten by Keebo Kyai Slamet because it can be a blessing in itself. At the time of the Kirab 1 Suro night, the sustainability of the procession also depends on this Kebo Bule Kyai Slamet. If it’s time for the parade he doesn’t want to come out, that means the parade will be canceled. Often the Kirab Malam 1 Suro incident has led to resignation because Kebo Bule sulked not wanting to leave the cage.

That was the information about the Kebo Bule 1 Suro Night Kirab in Solo, which is a Unique Tradition. Lastly, we just want to remind you that you shouldn’t have excessive trust in this Caucasian Kebo. Because as Muslims you must know that only Allah SWT has power over everything.
(Read: 12 Tourist Attractions in Solo, Central Java )