In the world of tourism, Pati Regency is not known to have many tourist objects that are crowded with visitors, but in fact, if we want to explore nature in Pati, there will be many tourist attractions with beautiful scenery but not much developed by the local government. Among the tours in Pati, there are nature tourism, family tourism, religious tourism, etc. The following is 12 Most Interesting Tourist Attractions in Pati, Central Java which is perfect for you to visit during school holidays. 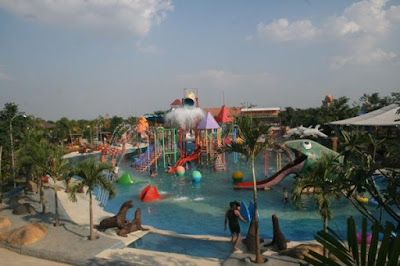 The first tourist spot in Pati Regency that we will discuss is Juwana Water Fantasy. Juwana Water Fantasy is actually a new starch tour, because it was just launched on June 7, 2012. However, seeing the development carried out by the management and the enthusiasm of the visitors, it seems that JWF deserves to be placed first on the list of tourist attractions in Pati. Juwana Water Fantasy is a recreation place for families where there are lots of games, both land and water. Currently there are 35 rides that have been built and are likely to continue to grow. To come to JWF you can visit the address Jl. Juwana – Rembang Km. 8 Ds. Bumimulyo (Mujil) Kec. Bar Kab. Pati ,, Juwana, Central Java, Indonesia 59186.
(Read: Exciting Holiday at JWF Pati, Central Java ) 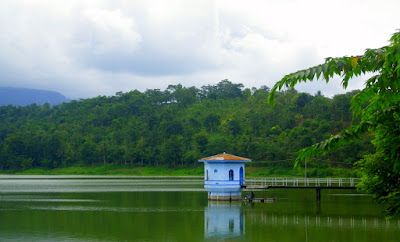 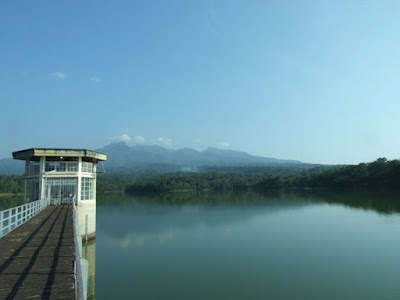 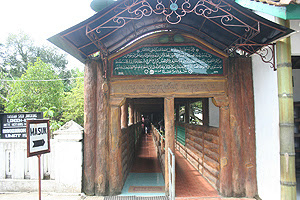 So if this is one of the religious tours in Pati Regency, namely the Syeh Jangkung Tomb or which has the nickname Saridin. This Saridin character is very well known in the Pati area and is often used as a story in Kethoprak performances. About who the Saridin figure is is still a debate in the community. However, the most widely believed opinion is that this Saridin is the son of Sunan Muria and his wife Dewi Samaran. Saridin has had supernatural powers since he was a child, even when he studied with Sunan Kudus, which eventually made Sunan Kudus furious and kicked him out of the pesantren. 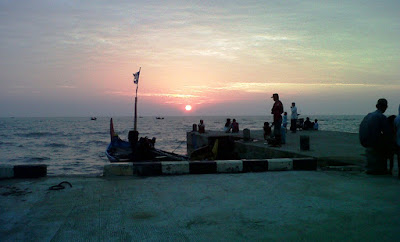 Pati Regency is known as a district which has an area directly adjacent to the Java Sea. This then makes Pati has a beautiful beach spot. One of the tourist attractions in the form of a beach is Banyutowo Beach. Banyutowo Beach is located in Banyutowo Village, Tayu. This area is bordered by Jepara Regency, and also close to several tourist attractions in Jepara such as the Portuguese Fort and Mandalika Island. 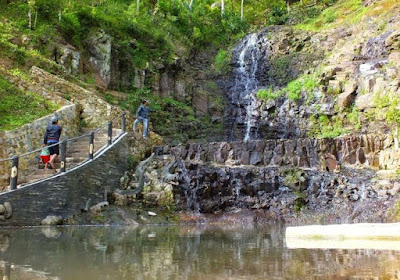 Jolong Tourism in Pati Regency is an integrated tour that attracts many local tourists. This Jolong tourist location is on the slopes of Mount Muria so that it has a cool atmosphere and is overgrown with large trees. There are several objects that can be enjoyed in this tourist area such as Camping Ground, outbound, agro-tourism, Grenjengan Waterfall etc. Grenjengan Waterfall is one of the favorite tourist spots in Jolong Agrotourism because the water that flows is very clear and the atmosphere is so cool. Around this tour you can see coffee plantations managed by PTPN IX. Access to Jolong tourism is still fairly poor, so it needs a lot of improvement from related parties so that more tourists come from outside the region. 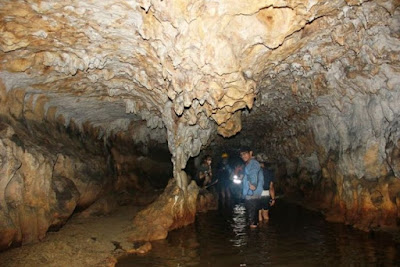 So next we will discuss another natural tourist spot in Pati Regency, Central Java, namely Goa Pancur. Goa Pancur is a natural cave located in Jimbaran Village, Kayen District, Pati Regency. This cave has a very beautiful view, namely in the form of stalactites and stalagmites along the cave. But what you need to know is that in this cave there is also a river which can be as high as an adult’s waist. Therefore, if you are going to walk through this cave you have to be careful. You can use the services of a local tour guide to show you a safe way and can tell you various things that exist about Goa Pancur. 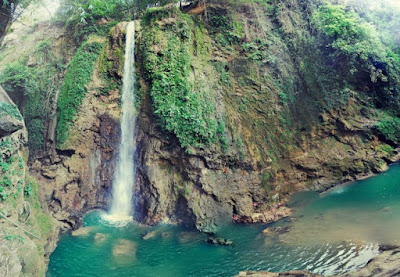 Pati Regency is directly adjacent to Grobogan Regency where the boundary is Mount Kendeng which is a limestone mountain. In Kendeng Mountain, there is a tourist spot that is still hidden in Pati Regency, namely the Rainfall Waterfall. Tadah Hujan Waterfall is about 75 meters high. Because road access is not that good, this tourist theme has not been visited by many tourists. But if you want a quiet atmosphere, with beautiful natural scenery, then you can go on an adventure to find the existence of this Rainfed Waterfall. 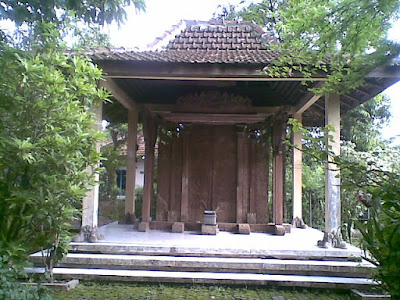 Next we will discuss Pati tourism which has a very high historical value, namely the Majapahit Gate. So named because this door is indeed a legacy of the Majapahit Empire. The Majapahit Gate is in the form of a teak door which is then given a shade like a gate. The shape is very simple, but this door has a high historical value. What is the story why this Majapahit gate can be located in Pati Regency? According to the story, the door was brought directly by Raden Bambang Kebo Nyabrang from Trowulan, which was the center of the Majapahit government at that time. Raden Bambang Kebo Nyabrang did this in order to be recognized by Sunan Muria as his biological child. Before arriving in Muria, precisely in Pati, Raden Bambang Kebo Nyabrang was stopped by Raden Ronggo who also wanted the Majapahit Door as a condition for marrying Roro Pujiwati. Raden Ronggo is a student of Sunan Ngerang where Sunan Ngerang is also a teacher of Sunan Muria. The two of them then fought completely, even up to 35 days. The fighting only stopped after the two were separated by Sunan Muria himself, and Raden Bambang Kebo Nyabarang was recognized as Sunan Muria’s biological son. The Majapahit door was then left at the place of the battle until now. The area where the battle was later named as Rendole, stands for “Sak chlorone padha bandhole” which means that both are equally powerful. 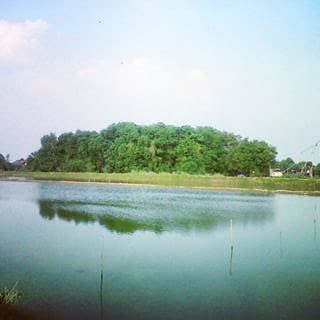 Seprapat Island is an island located close to Juwana Port, precisely in Bendar Village, Juwana District, Pati Regency. Seprapat Island is located at the mouth of the Silugonggo River, Juwana, Pati. This island is small, or to be precise about 220 x 65 meters. On this island, the mystical nuance is very pronounced, namely the presence of trees that grow around the island and the presence of a tomb which is the tomb of a guardian, Ki Lodang Datuk Wali Joko. Many pilgrims visit this tomb on Seprapat Island. But unfortunately there are also some of these pilgrims who have other intentions, namely pilgrimages in the hope of getting blessings in the form of wealth, or often referred to as pesugihan. But all of us return to the intentions of the person, for you we do not recommend using methods like this to get a certain desire. 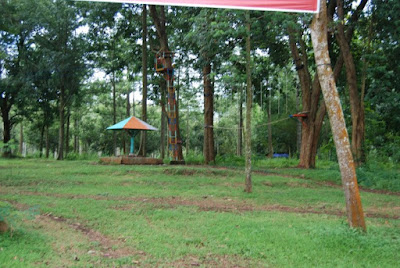 This starch tour is a natural tour that can be enjoyed by all family members, namely the Regaloh Camping Ground. The Regaloh Camping Ground provides a forest-like atmosphere with lots of beautiful trees. In this place serig is used as a camping or camping location. Besides that, on weekdays it can be used as a hangout, especially for Pati residents who want to enjoy the cool forest atmosphere. In addition to its comfortable atmosphere, Bumi Perkemahan Regaloh is also equipped with several games such as flying fox, swing and also a gazebo for relaxing. To visit this Regaloh Camping Ground, you can take the route to Tlogowungu District. After passing the Tlogowungu Market you just have to turn right and take the route about 1 km away. 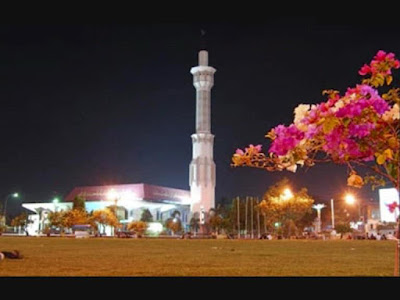 Pati City Square is unique compared to squares in other cities. In Pati City Square, almost every night there are lots of traders selling their wares, from various typical Pati culinary delights to various items such as clothes, accessories, toys, etc. Besides that, small children can also enjoy various kinds of games such as mini cars, odong-odong, mini Ferris wheel, etc. These merchants sell around the square, and also on the side of the road around the square. Meanwhile, in the middle of the square itself, there are so many visitors sitting around enjoying the beautiful night in the city of Pati. Visitors not only come from the City of Pati but also from areas on the outskirts of Pati Regency. The crowd in Pati City Square has become a kind of public market for the residents of Pati. Therefore, if you visit Pati, don’t forget to enjoy the Pati City Square at night while tasting special culinary delights such as Soto Candlenut, Pempek Pati, Fried Rice, etc.

Pati tourist attractions are indeed interesting to visit. To further add to the fun of traveling around Pati, you can rent a car in a car rental around Pati. one of the car rentals that provides car rental services with a good fleet of vehicles is Docar.co.id. If you are interested you can immediately visit their site DOcar rent a car in Semarang