10 Exotic Beaches in East Java Most Visited by Tourists

10 Exotic Beaches in East Java That Are Visited by Tourists, the Most Beautiful Tourist Attractions – East Java is a province that has tourist destinations that are not inferior to other provinces. Every year, East Java tourism is visited by many tourists, both local and foreign tourists. East Java is famous starting from the beauty of Mount Bromo which is already worldwide, Ranu Kumbolo, Jatim Park, Museum Angkut, and many other tourist attractions that can be found here. No wonder East Java is now attracting a lot of attention from domestic and foreign tourists.

10 Most Beautiful and Exotic Beaches in East Java

East Java also has exotic beaches and refreshes the eye. These beaches are scattered in the cities of Malang, Jember, Banyuwangi, and other cities in East Java. Among these beaches there are still beaches in East Java that have not been touched so that they are rarely visited by tourists. You are expected not to pollute the environment by not littering or not destroying the ecosystem on the beach. Here are 10 Exotic Beaches in East Java Most Visited by Tourists. 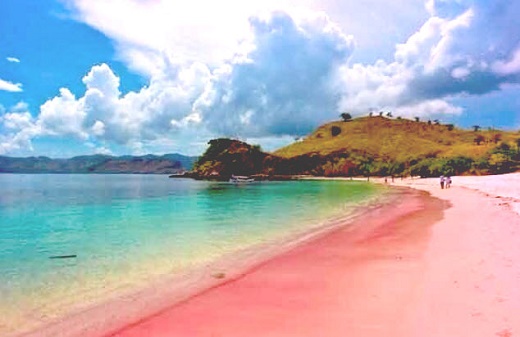 Red Island Beach Tourism is located in Sumberagung village, Pesanggaran Subdistrict, Banyuwangi. The time you need to get to this beach is about three hours from downtown Banyuwangi. The view as the sun begins to set and the sky turns orange is not to be missed. Pulau Merah Beach is nicknamed the Kuta of East Java and many argue that this beach has features like most beaches in Brazil.

You can sit back and relax enjoying the beach view. Apart from that, you can also surf because this beach has become a place for world-class surfing destinations in Java. The condition of the waves on this beach reaches a height of 4 to 5 meters which is very suitable for surfers of various levels. You only need to pay 25,000 – 50,000 rupiah to rent a surfboard that has been provided by the manager. 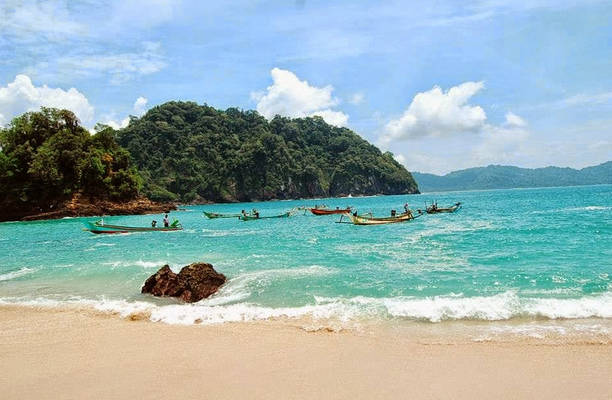 The location of the beach, which is better known as the Green Bay of Banyuwangi, is precisely in Sarongan village, Pesanggaran subdistrict, Banyuwangi. You can take the route to the south as far as 90 km from the city center of Banyuwangi. This beach is even more special with its soft white sand, clear turquoise sea water and a waterfall that reaches 8 meters high.
You have to track down a path of approximately 2 km to get to this beach. In some parts of the road, ropes have been provided that make it easier for visitors to navigate the road. You are advised to camp here overnight as the journey is quite tiring. There, you can relax enjoying the clear water, get wet in the waterfall or catch fish and shrimp. 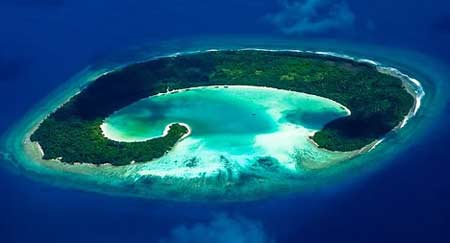 Plengkung Beach is the Javanese name for G Land which is a famous beach in the city of Banyuwangi. This G Land Beach Tour or Plengkung Beach is often referred to as The Seven Giant Waves Wonder. This is because the wave height at G Land reaches 4 to 6 meters along 2 km with a tiered wave formation. The beauty and ferocity of the waves are said to be a class of Hawaii, which makes surfers from all over the world attracted and flock to this beach.

April to September is the best time to surf on this beach. Surfing sports lovers can enjoy surfing with a natural backdrop of the green forest. A stretch of sandy beach covered in a forest area that is still very natural, and the place is still in the Alas Purwo National Park, so you will feel the fresh air that refreshes your mind. 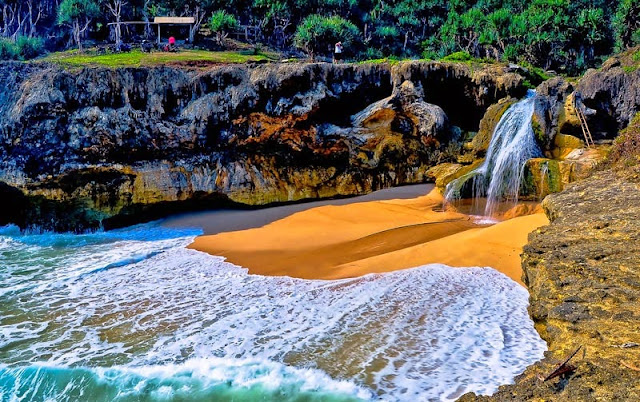 Banyu Tibo Beach is located in Widoro village, Donorojo district. This beach tourism in East Java is called Banyu Tibo which is taken from the Javanese language and means falling water. And the waterfall located on Banyu Tibo Beach is the source of a small river that flows over a cliff and this river flows into the sea so that it blends with the waves in a small bay. This river water is very clear and never dries up during the dry season.

The location of Klayar beach is approximately 35 km to the west of the city of Pacitan and precisely located in Donorojo sub-district. It takes you about an hour to reach this beach by going through quite a difficult road.

Klayar Beach is one of the leading tourist attractions in Pacitan. The color of the sand is milky white and what is special here is a rock that looks like a Spinx as well as a natural fountain that reaches 10 meters high. You will fall in love with the gradations of sea water from blue to turquoise, combined with the white sand of this beach. Besides that, the solid rock that protrudes seems to make it almost the same as Tanah Lot Bali. 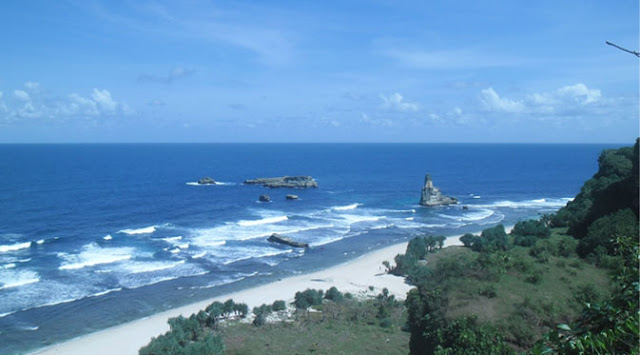 The location of Buyutan beach is not far from Klayar beach and is precisely located in Donorojo sub-district, Pacitan. From the city of Pacitan, you have to cover a distance of about 44 kilo meters and this can only be reached using private vehicles because there is no public transportation operating around this beach. Buyutan beach condition is very clean and you can see the beauty of the beach sand which is white as milk, because not many tourists have visited it. 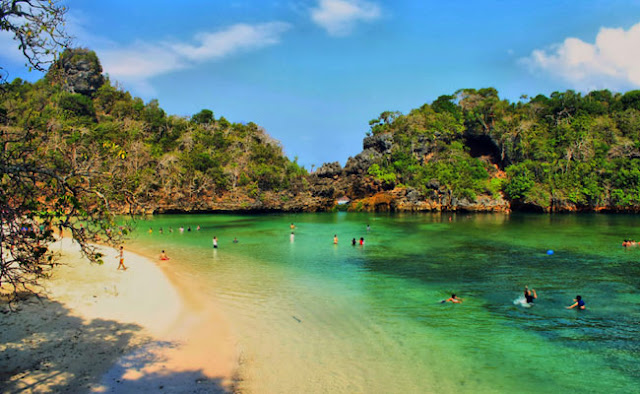 Sempu Island is under the protection of the Natural Resources Conservation Center (BBKSDA). This small island is still in one location with Sendang Biru Beach, more precisely located in Tambakrejo, Sumbermanjing Wetan, Malang City. Inaugurated since 1928, Sempu Island has been used as a nature reserve that has various ecosystems such as coastal forests, mangrove forests, and lowland tropical forests.

Many nature lovers who visit Sendang Biru Beach to camp on Sempu Island by crossing it using fishermen’s boats. Sempu Island is even more special because it has a Segara Anakan lagoon on the island and you need about two hours to reach it by tracking through the forest as well as steep roads.
You can see white sand wrapped in very clear blue sea water there and don’t miss the coral view that protects the Segara Anakan. In addition, you are safe to swim there because the sea water is very calm. Visitors are expected not to throw away and damage the existing ecosystem in order to maintain the beauty of this island. 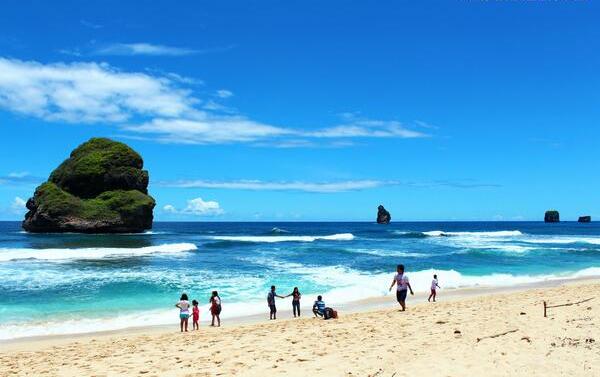 Gua Cina Beach is still classified as a natural beach and is located in Sitiarjo village, Sumber Manjing Wetan sub-district, Malang Regency. You have to bring a private vehicle to get to this beach and only pay 4,000 rupiah per person to enter this beach resort in East Java.

This beach has a very distinctive characteristic of having three islands located in the middle of the beach, namely Bantengan Island, Gua Cina Island and Nyonya Island. The facilities there, including food stalls, toilets, baths, and prayer rooms are available. You are expected to be careful to reach the shoreline because the exotic waves are quite large. When the coast has receded, you can cross to one of the several islands located in the middle of the beach by just walking. You can also feel the sensation of sleeping on the very white and soft sand while enjoying the beauty of the blue sea. 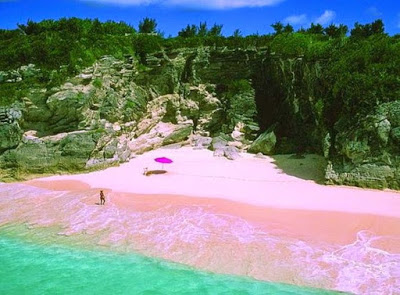 Tiga Warna Beach is still classified as a new beach in the Malang area because it was only inaugurated as a tourist spot in mid-2014. The location of this beach is still in the same area as Sendang Biru beach and precisely in Tambakrejo village, Malang Regency. Road access and public transportation are not yet perfect, so it is advisable to bring a private vehicle. You only need to pay 6,000 rupiah per person to enjoy the beauty of this beach, but you have to hire a guide to get there.

Snorkeling is one of the activities that can be done on this beach. You only pay 15,000 rupiah per person to rent snorkeling equipment. The large number of natural coral reefs still inhabit this coastal sea, because it is used as a coral reef conservation location. 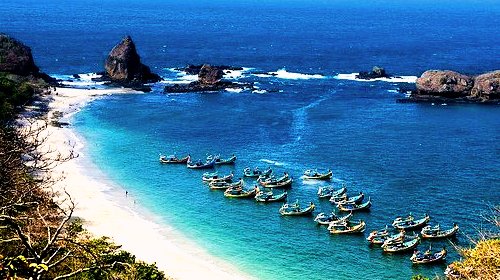 The location of Papuma beach is precisely in the village of Lojejer, in the Wuluhan District, Jember. The journey that must be taken from the city of Jember can take quite a long time to get to this beach, so it is advisable to stay overnight there. You don’t need to worry because the manager has provided several inns and cottages which are quite affordable, around 150,000 – 450,000 rupiah per night. The price of admission to the beach is enough to pay around 5,000 to 7,000 rupiah.

This beach is often used as a landscape by photographers from various cities or pre-wedding photo locations. The view of Papuma beach is very beautiful and is equipped with a combination of white sand and coral stones that spread out on the beach. Seven large coral towering on the beach is one of the characteristics of Papuma Beach. The size of the corals is large which makes it look like an island. The seven corals have different names. You can feel the sensation of being hit by the waves from the top of the reef.